A chic platinum, carved emerald and diamond jabot pin, by Cartier, circa 1912

This is a fabulous carved emerald and diamond jabot pin created by Cartier Paris in the early years of the 20th century.

Jabot pins became popular in the closing years of the 19th century as a means to secure the lace trimming around the necklines of contemporary fashion; however, by the first World War they were used in a variety of ways decorating lapels, necklines and hats. 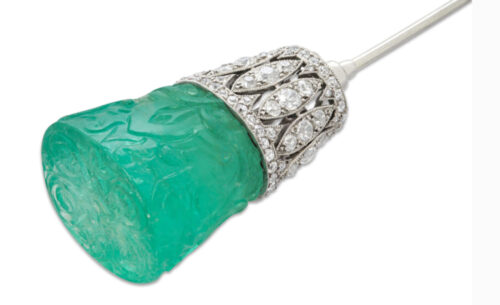 View a video of the platinum, carved emerald and diamond jabot pin here

The shape of the emerald, engraved with foliate motifs of oriental inspiration, is very unusual and is perhaps the result of the re-polishing of an earlier stone or it may in fact have been the main influence in the design of the whole jewel.

It reminds us of the shape of some of the jewelled aigrettes of the time which were particularly popular among Russian clients.

The use of carved precious stones, although generally associated with jewels of the 1920s, were already present in Cartier’s repertoire as early as 1912.

Further details:
Platinum, emerald and diamond jabot pin, the upper part with a Russian emerald  with Mughal carvings, the base surrounded with old-cut diamonds in a geometric pattern, with additional old-cut diamonds on the elongated terminal

With maker’s mark for Henri Lavabre

The pin is accompanied by a certificate of authentication from Olivier Bachet, founding member of the International Antique Jewelers Association (IAJA)

Cookies help us deliver our Services. By using our Services or clicking I agree, you agree to our use of cookies. Learn more.